Pete Johnson was one of the three greatest Boogie-woogie performers along with Albert C. Ammons and Meade Lux Lewis.

Johnson, as child, did not have much exposure to music. At the age of 3, his mother, due to poverty, gave him away to an orphanage from which he ran away after a while and returned home. At school he studied for less than five years and was also forced to take on any job to order to help his mother. During that time, he worked as a shoemaker and in a factory.

When he was 18, Pete Johnson began his musical career in Kansas City as a drummer. It was around this time that he began to master the piano and performed in the church. In 1926, Pete Johnson worked as a pianist with various groups. During this period, he often performed with the singer Big Joe Turner.

Finally, in 1938, a famous concert was held at Carnegie Hall, where the famous trio marked the beginning of the Boogie-woogie craze.

One of the most well-known works of Pete Johnson is Roll 'Em Pete. This piece is considered to be the first full-fledged rock and roll recording. 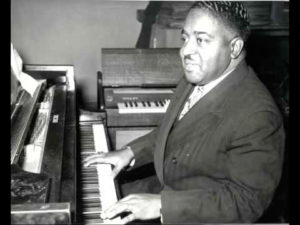