Albert Ammons was an American jazz pianist and composer known to be one of the founders of the Boogie-woogie style.

Ammons was born in the family of pianists. His parents did not force their son to follow the same career of a musician. He never received an academic education, but by the age of 10 he played the piano quite well and at the same time he also was into drumming.

It is well-known that his father loved "jazz-blues" style and taught a few chords to the young Ammon which he subsequently carefully memorised. He then began working as a taxi driver. In his free time, Ammons continued his independent learning to play the piano. His inspirations were the famous jazz musicians at that time - pianists, Hersal Thomas and the two brothers, Alonzo and Jimmy Yancey.

In a quite a typical way, for a jazz pianist of that time, he listened to the music, picked up the chords, learn to improvise and of course tried to write his original work. Ammons worked as a musician in a diner and a nightclub. Perhaps such a fate was not prepared for Ammons, but there was clearly a natural talent and a bit of luck followed.

Meade Lux Lewis was another star at the time who worked in the same Silver Taxicab Company. He probably lived a parallel life with Ammons and also got his hands on some jazz chords as a child. Two taxi drivers, two self-taught pianists and two big jazz lovers created and glorified the whole movement of jazz - Boogie-woogie.

Then, there was the success of the single Swanee River Boogie. His work was sold in a million copies, and these were, by the way, the 1930s. Then, there was a meeting and joint work with pianist Pete Johnson.

Finally, the performance of the entire, now great, trinity at Carnegie Hall in 1938. This presentation marked the beginning of a decade-long-boom Boogie-woogie fashion

Ammons' last triumph was his performance at the inauguration of President Harry Truman in 1949. 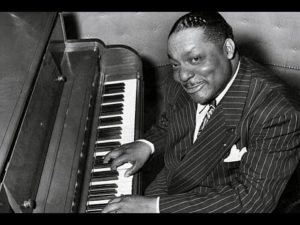